The Canadian dollar is the official currency of Canada. First introduced in 1858, since that moment all accounting is made in the national currency.

Canada decided to start using the dollar instead of the sterling pound due to the dissemination of the so-called Spanish dollar or peso in North America during the XVIII century and the early XIX, and also due to the standardisation of American dollar. The region of Québec was a real advocate for the use of the dollar (the Bank of Montreal issued banknotes in dollars in 1817), while the Atlantic colonies which had stronger links with the United Kingdom, were not so in favour.

The province of Canada stated that all accounts would be made in dollars from January 1858 and ordered the issue of the first official Canadian dollars in that same year. The colonies, which would join the Canadian Confederation soon, gradually adopted a decimal system in the following years.

Finally, the government approved the Uniform Currency Act in April 1871 to replace the currencies of the different provinces under one single Canadian dollar for all of them. The golden standard was officially abolished on the 10th April 1933. 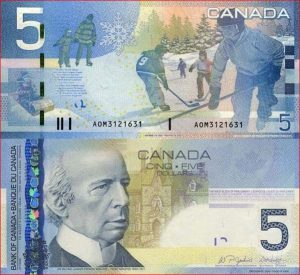 Currency exchange order and reservation by phone +370 641 99966
You can watch Canadian dollar rate online at: www.valiuta24.lt

Any cookies that may not be particularly necessary for the website to function and is used specifically to collect user personal data via analytics, ads, other embedded contents are termed as non-necessary cookies. It is mandatory to procure user consent prior to running these cookies on your website.